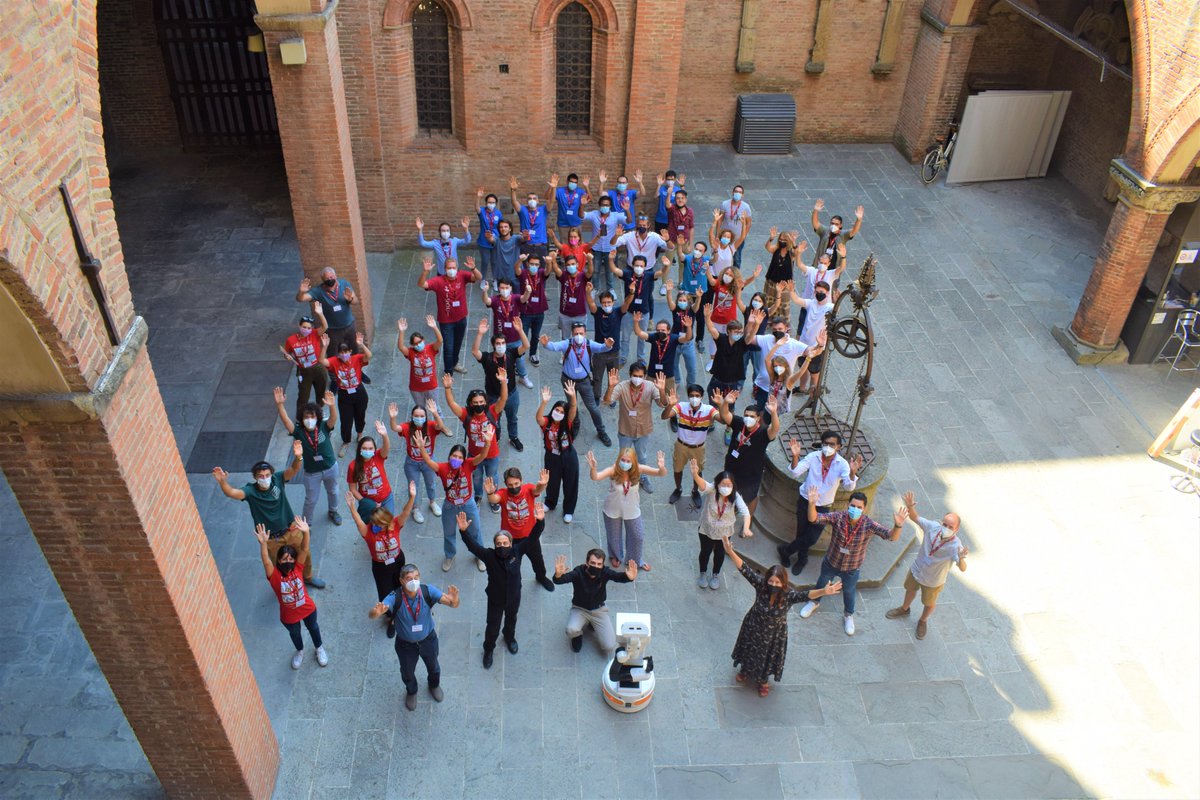 Last week, from the 6th to the 10th of September, the 2nd International Smart Cities and Robotics Challenge (SciRoc) was held in Bologna  (Italy) in the historic location of Palazzo Re Enzo. As a part of the European Robotics League (ERL), the event was aimed at showcasing the integration of robots in smart urban environments and followed the successful first edition of the competition, which took place in the MK Centre in 2019. As in the prior edition, the SciRoc challenge included many robotic tasks, or “episodes”. Teams from Europe and the UK were called to compete on several different robotic challenges, including serving orders at a coffee shop, correctly grasping and placing supermarket products on shelves, and even manoeuvring a shopping trolley.

The robotics team led by Gianluca Bardaro (Research Associate at KMi) and Agnese Chiatti (PhD student at KMi) won the shopping cart episode. The task of correctly pushing a trolley along a given trajectory, which is trivial for us humans, is in fact very challenging for a robot to perform. To succeed in this task, a robot needs robust navigation and obstacle avoidance capabilities to navigate the arena, as well as the ability to perceive the trolley location and orientation as it moves over time, and, last but not least, a sophisticated automation model to adapt the movements of the robot based on the behaviour of the trolley.

To tackle a challenge that entails such diverse areas of expertise, team leaders Gianluca and Agnese had to form an equally diverse team. As a result, Team Hybots (from “Hybrid Robots”) came to light: a joint collaboration between the ISDS Lab at KMi and AIRLab at Politecnico di Milano. With the help of team members Filippo Betti, Chiara Bigi and Stefano Gatti (Master Students in Automation and Control Engineering), the team developed a hybrid robotic architecture which integrates different navigation, perception and control components. The solution was deployed on a PAL Robotics’ Tiago robot, i.e., the de facto sixth member of the team.

Thanks to the team’s win, the Knowledge Media Institute went from successfully organising the Milton Keynes event in 2019 to winning as one of the participating teams in 2021.
Congratulations to the whole team!