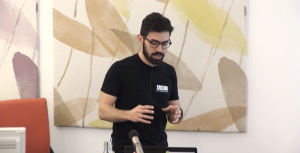 On the 8th February, Angelo delivered a seminar to the KMi in which he described the work he has been doing in the last two years for his postgraduate research.

He started with a little bit of introduction about science. Shortly, he moved to the currently available technologies for keeping track of the development of the different research areas. He showed how this technologies were not satisfactory enough if we want to perform an early detection of research topics.

In presenting, the state of the art (including The Structure of Scientific Revolution by Kuhn), he could state his main hypothesis, regarding the existence of an embryonic stage that research areas face, and that it is possible to detect their emergence during this stage1.

Afterwards, he moved towards the technical part of his study. Initially, he described his first study that allowed him to test the hypothesis. Based on the obtained results, he then showed the design of his current second study which aims to the effective detection of emerging trends.

Towards the end of the seminar, he gave a glimpse of the evaluation he wants to pursue, and he also talked about some current conclusions.

Angelo is thankful to everyone who attended the seminar both physically and online for their questions and comments.

Here is a video recording of the seminar. Enjoy.

We do apology for the lip sync issue.

Link to the multimedia file: https://player.open.ac.uk/embed/d41e4b29f6