This episode will be part of the 2021 competition. For a detailed and up to date description please refer to the official rule book (to be released in April).

Episode 3 aims at evaluating the capability of a robot to interact with one challenging device found in environments designed for humans: the shopping cart.
Episode 3 is a joint effort between European projects SciRoc and Eurobench. Episode 3 corresponds in fact to the BEAST (Benchmark-Enabling Active Shopping Trolley) Eurobench benchmark for mobile robots.
The physical elements of the Episode are its test bed. The BEAST test bed comprises two main elements:

The aim of the BEAST benchmark is to evaluate the capability of a mobile robot to correctly manoeuvre a wheeled device (shopping cart or walker). In this context, “correctly manoeuvre” involves performance metrics con force (e.g. smooth application of force to the handle over time instead of abrupt bursts). The BEAST benchmark cerning geometry (such as staying close to a predefined trajectory or maximising distance from obstacles), time, makes use of the capability of the active element (cart or walker) of the test bed to simulate physical disturbances that occur in real-world scenarios, such as unevenly distributed wheel friction or small obstacles on the ground (such as a low step or a pebble).

Platforms Allowed.
The BEAST benchmark is suitable for any autonomous mobile agent that is physically capable of operating the active trolley or walker in the arena. As such, it can be executed by any robot provided with an end-effector(s) suitable for interaction with the active cart’s handle, including (but not limited to) humanoid robots. Execution of the benchmark by humans, while not explicitly considered, is nonetheless fully possible: thus making it possible to collect “human baseline” datasets to be compared with those generated by robots.

Setup.
The setup is composed of an arena and an active (i.e., robotized) cart, plus a few additional pieces of equipment for network and processing. Setup is simplified and even if performed from scratch (with the arena broken down to its components) should not take more than a workday for an experienced operator.
Since the shopping cart is not designed to be disassembled, the only piece of the testbed that requires physical assembling is the arena. The walls of the arena are composed of 1 m tall panels.
The arena includes two apertures. One of them goes down to the ground, and is used for entry and exit; the other is a cutout in the surrounding wall. The orange pillars in the rendering are heavy PVC tubes for construction, while the white panels composing the walls of the arena are made of low-density PVC, similar to the commercial product called Forex. Structural support is provided to the arena by a rigid frame built from modular aluminium profiles with a 40 x 40 mm square cross section. Profile elements include an 8 mm wide groove, used both to insert mechanical joints (e.g, those that connect the profiles, described below) and to guide and contain the edge of the wall elements. In order to accommodate possible unevenness of the floor over the (quite extensive) perimeter of the arena, the whole structure is supported by adjustable feet. Below are images of the arena and of the active shopping cart. 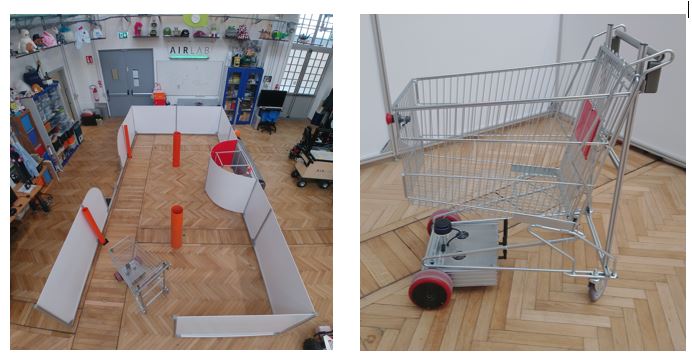 Procedure.
While executing the benchmark, the shopping cart (pushed by the robot) has to follow the trajectory shown in the image on the right. Such trajectory is composed of four parts:

More specifically, the phases of the protocol of the Episode are defined with respect to the numbered Checkpoints (line segments) in the image above. Such phases are:

The scoring mechanism for this Episode complies with the framework used by the European Robotics League for Task Benchmarks. As such, it is based on the three sets of Achievements, Penalising Behaviours and Disqualifying Behaviours described in the following.

Achievements can be collected only in the specified order.
Achievements A2…A6 require that the trolley, pushed by the robot, reaches specific checkpoints. The definition of “Reaching a checkpoint” is the following:

Let CP be the checkpoint that an Achievement is associated to. If the trolley reaches any checkpoint different from CP before it reaches CP, the benchmark gets interrupted by the referees and no further Achievements can be collected.
When the execution of the benchmark gets interrupted in this way, the duration of its execution is conventionally set to the full allowed duration up to the timeout (this is done to avoid unfair advantage to robots that provoke an interruption, since execution time is used to break ties).
For Achievements A2…A6 no constraints are imposed to trajectory shape beyond those imposed by the definition of “reaching a checkpoint”.

Penalising Behaviours.
PB1 – The robot hits any piece of the benchmark setup (e.g., a part of the door assembly) without inflicting damage. An exception is made for the elements of the shopping cart, which can be hit without penalty (provided that they do not get damaged).
PB2 – The robot falls down and requires that the robot’s team performs a manual get-up.

For the definition of the Penalising Behaviours (and, later, of the Disqualifying Behaviours) the following definitions of “damage” and “hit” are used:

An additional penalising behaviour is inflicted to the team every time the corresponding event occurs, even if the team has already been penalised for the very same behaviour.

[1] The robot is considered as outside the testbed area when none of its elements has a projection on the floor that lies inside the 3 m by 6 m rectangular area of the floor which contains the testbed.

tie-breaking criterium: the performance of the robot which finished the benchmark in a shorter time is considered as better.