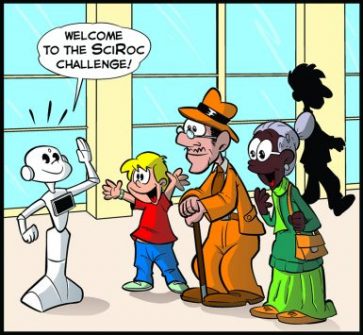 The call for participation to the world’s first smart city robot competition was officially closed on June 30th. 15 teams from 8 countries will be competing across 5 different robotic tasks (or episodes).

Episode 3 – Coffee shop order delivery
This episode, sponsored by Costa Coffee, will see robot waiters attempting to manage order deliveries in the competition arena. This task will involve technologies and expertise at the intersection of Robot navigation and Robot perception.

Episode 7 –  Shopping pick & pack
Picking the correct objects and preparing a shopping parcel is a challenge for robots. This episode, sponsored by Ocado Technology, will see the recent advancements in mobile manipulation at work.

Episode 10 – Open the door
A task as simple as opening a door could be taken as granted by us humans, but reproducing the same set of actions on a robot requires orchestrating several fine coordination mechanisms and complex manipulation technologies.

As part of the 5 challenges the robots are set, they will need to access data from Milton Keynes’ smart city portal in order to carry out the competition tasks.  The teams will compete throughout the week as they seek to get on the rostrum for the awards ceremony being held on Saturday 21st September.

Milton Keynes’ has one of Europe’s largest shopping centre and the purpose of having the competition in the middle of it, is to create a massive public engagement event.  500,000 shoppers are expected to come through the centre during the week and will have a chance to learn about what robots can do and how they can interact with smart cities. Alongside the competition will be public engagement activities, a technical symposium and a chaired debate on ‘Artificial Intelligence – Fact vs Fiction’ taking questions from the general public.

A detailed schedule for the week of 16 to 22nd September will be published over the summer.